Dismiss IBM At Your Peril

Summary
•Revenues are dropping but this is normal. They are selling low value divisions in order to concentrate on higher value sectors.
•Share buybacks are excellent for shareholders. The company has always done this. They are not financially engineering the numbers.
•Cloud business revenues are growing at 60%. IBM believes it has 3 distinct advantages over its competition in this area.

International Business Machines Corp (NYSE:IBM) has had a poor 12 months by its standards. Nevertheless the negative attention that the company has received recently has been totally unfounded. We are holding this stock in our portfolio and will continue to hold it for the long term. The company has raised its dividend for 19 years straight (we collected our latest dividend payment on the 10th of March) and we believe it will continue to reward its shareholders through increased dividend payments going forward. Let’s go through some of the myths surrounding this stock and explain in detail why many analysts are wrong in their assumptions about IBM.

First of all lets look at the stock chart and compare it with
SPDR S&P 500 ETF Trust (NYSEARCA:SPY) since the bottom of the last equity bear market (March 2009)

The performance here is not terribly bad. Yes it has underperformed the S&P500 but not by very much. It is only since mid to late 2014 that the stock has seriously underperformed. This is too short a timeframe to make a long term decision about this stock. So why has the company underperformed so much in the last 9 months? Rating agencies and analysts are stating that the company has fundamental problems which can not be resolved. Let’s go through the negativity surrounding this stock and question the validity of some of the claims.

Firstly bears are stating that revenue is not growing and the stock price wont increase substantially in price without increasing sales every year.

Sales are definitely not increasing as the chart shows below. 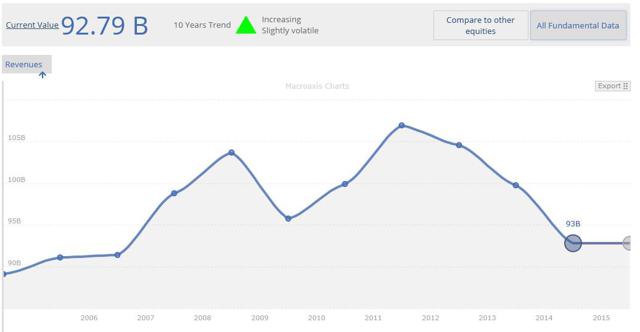 Sales are near 2007 levels which is a disappointment to say the least. Yet many analysts forget that IBM has sold many parts of its business in the last few years. It is very difficult to grow revenues if parts of its business are being sold off. Synnex, Lenovo and Global Foundaries are just a few of the companies that IBM has sold to recently. I find it amusing when I read articles about IBM being a dinosaur. This statement couldn’t be further from the truth. This company is actually getting smaller to become more profitable in the future. It is selling its low profit divisions in order to concentrate on higher value markets. The chart below is the chart I am interested in (net profit margins) and although recent action has been poor, I believe the company will return to healthy profitability as it has done from 2006 to 2011.

IBM is presently going through huge transformation. The company has doubled its profit margin in the last 10 years (which many analysts never mention) but I expect this to even get better. Why? Because of the bold decisive decisions the company is making. IBM is competing in sectors that are changing rapidly. Cloud and mobile initiatives contributed $25 million to revenues in 2014. An extra $4 billion is going to pumped into this area by the company in 2015. The company expects that this area of its business (strategic imperatives) of cloud, analytics & mobile will grow to $40 billion in revenues by 2018 or 40% of turnover.

There are 2 ways you can look at this company, long term and short term. We as long term fundamental investors understand the direction this company is taking. It is selling off (which will reduce revenues in the short term) low value divisions in order to invest in higher value sectors. Also the strong dollar may effect the company’s earnings in the short term as international sales make up a large part of the company’s turnover. I as an investor don’t mind falling sales in the short term as long as profit margins are increasing. The company will continue to adapt through investment and acquisitions which is a requisite in the tech sector as the companies that adapt the quickest will dominate this sector in the years to come.

The second gripe many bears have is the company’s buyback programs. Analysts who are bearish on this company claim that these buyback programs (which can change earnings) are being done to hide the real problems at the company. I don’t buy any of this. A company doesn’t become a 100 year old giant in this industry by “financially engineering” the numbers. This company always has bought back shares through share buyback schemes. Also why would Warren Buffet continue to invest in this company? Would he continue to be a shareholder if he thought IBM was doctoring the numbers? Why is he increasing his holdings in the company at the moment? As income investors we love share buybacks. Buybacks reduce the amount the shares outstanding which results in our shareholdings becoming more valuable. When you couple buybacks with increasing dividends, you have a company that genuinely looks after its shareholders. So when you read another article about IBM attempting to “hide the truth”, question the validity of the claim. Many analysts are looking for readers for their work and negative bombastic titles unfortunately attract a lot of attention.

Finally the last gripe IBM bears have with the fundamentals is the debt load. Look at the chart below to see that the total debt the company has at the moment is in the region of $40 billion 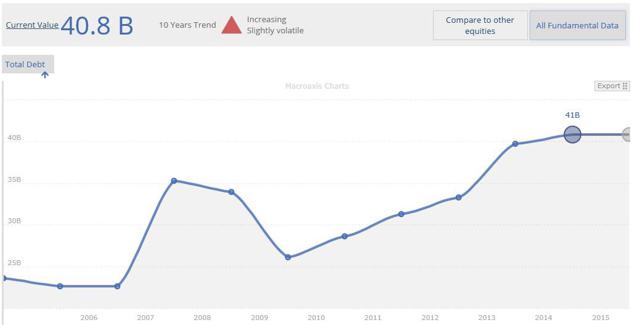 Nevertheless many investors don’t understand the breakdown of this debt. This debt is comprised of global financing debt and operational debt. When you go the company’s latest earnings report, you see that global financing made up over $30 billion of this figure. This is not IBM debt. This is consumer debt. Essentially it is the customer’s debt but because IBM is doing the lending, it is showing up as debt on its balance sheet. The consumer borrows from IBM instead of borrowing from a bank. This insight greatly reduces company risk as you now see the company really only has under $11 billion of operational debt. Therefore why do many analysts say the company is over leveraged? IBM could pay off its operational debt ($11 billion) in under a year from its current net income ($15.75 billion)

So irrespective of the points mentioned above, what’s the one area IBM can grow fast in? I believe it will be their cloud business. Look at the impressive growth levels in the table below

Investors get excited when they see these types of growth rates. So how can IBM keep producing these growth rates or even improve them? The acquisition of Softlayer in 2013 really gave IBM momentum in its cloud revenues and it hasn’t looked back. The company believes it has a strategic advantage in this sector and is primed for more growth because of 3 underlying principles.

1. Hybrid. What this means is that the company through Softlayer’s technology will be able to offer its clients high value cloud solutions. Many companies have many clouds which contain massive amounts of information and these clouds must ultimately be able to communicate with each other in the future. IBM will be able to solve this problem through their hybrid cloud technology. Furthermore, more value is added when the respective problem is bigger. Hybrid clouds will be able to solve big problems for companies

2. The second principle where IBM feel they have an advantage over its competition is its data management. Many large companies have huge servers of data that are critical to the success of these companies. Whereas before, data would have had to be moved constantly, now this is not the case. IBM has technology where the application is moved to the data. The data can then be put on the application and then moved to wherever it has to go. Data management is IBM’s bread and butter. It is the best in the world is this area and definitely wants to remain there

3. Finally security. Companies need to stay compliant in this area as the world becomes more regulated about people’s information. It is IBM’s job to work with companies to ensure company data is 100% controlled. Solving problems for CIO’s (Chief Information Officers) of large corporations is where the value is here. Furthermore this area will be scrutinized even further in the years to come as the digital age firmly takes hold. Therefore companies in this space that add value will get a lot of contracts.

To sum up, I believe this giant will make big strides in the years to come. It is adapting rapidly to a changing tech sector. Yes it may suffer in the short term due to dollar strength and divestitures but the company has always acted “boldly” in its decision making. Many analysts are underestimating this company.