Gilead’s Q1 Earnings May Finally Confirm The Bottom Is In

I read a article on Gilead Sciences (NASDAQ:GILD) recently on Seeking Alpha where the author’s intention was to finally throw in the towel. This saddens me knowing the author probably deliberated over the decision for many months before finally deciding to exit all holdings. Selling any position for a large loss is always an extremely difficult decision especially if the investor feels the respective company has strong competitive advantages. The recent performance of Gilead’s share price makes me remember two investing quotes from the late Sir John Templeton which actually recommend both buying and selling when a stock has been badly beaten down. The first is “Invest at the point of maximum pessimism” and the second is “Only sell a core holding when you have found a better opportunity“. Personally, I am more aligned with Templeton’s first quote for a whole host of reasons with which we will go through but that does not mean we can dismiss the latter quote. In fact if the author of the recent Gilead article mentioned above buys a different stock with the proceeds and the new investment outperforms Gilead over an established timeframe, then the author’s decision to sell would have been the right one. That is the beauty of investing. We all come to the market with different goals and expectations. What you have to uncover for yourself is what style suits you and then stick to it to make sure your emotions rarely get involved. 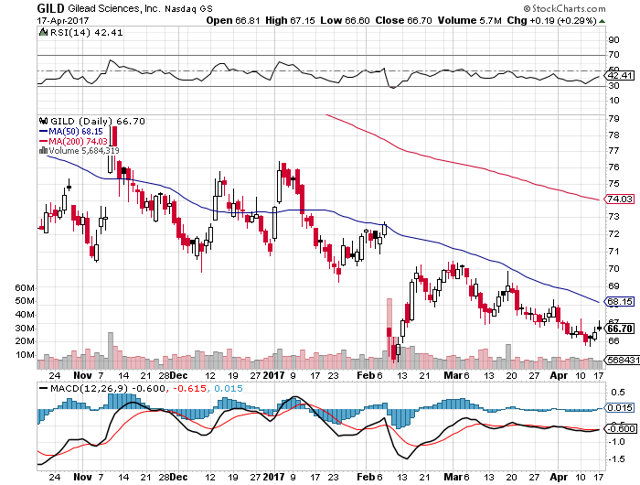 Gilead is the typical company that demonstrates what happens to stock when growth disappears. Shares of this company have in all intensive purposes been cut in half over the past two years but the company’s balance sheet still is holding up well in my opinion. Although 2017 and 2018 will undoubtedly be tough for the pharmaceutical company, Gilead reported net income of $13.5 billion in 2016 along with free cash flows of $15.92 billion. Total cash in the company came in at just under $12 billion last year and its debt to equity ratio came in at 1.39. The collapse in the share price has caused the dividend yield to spike to 3.12% and despite the lackluster earnings projections over the next few years, the dividend looks particularly safe as the current pay-out ratio is 18.5%. However as alluded to earlier, its the growth metric or the apparent lack of it which has tanked the share price due to the disinterest of Wall Street. In the fourth quarter of 2016, top line sales were down 14% on a rolling quarter basis, operating income was down over 28% and earnings per share dropped a whopping 26%+. Not a recipe for future share price gains here but there is more to this Gilead story that meets the eye..

True value investors always enter the fray when the numbers stack up. Gilead both compared to this industry and its past numbers looks very cheap at this stage and must have the lions share of bad news already priced into the stock. With an earnings multiple of 6.7, a book’s multiple of 4.6 and a sales multiple of 3, you would have difficulty finding a company this size this cheap in the biotech sector. Furthermore the company’s price to cash flow ratio of 5.4 looks very attractive when you consider the company’s dominant position in hepatitis C along with its patents in the HIV space. However, it is invariably a company’s growth story which changes how the street views a stock and that is what has happened to Gilead.

For example, back in 2013, the stock was trading around the same level (mid-sixties) but yet the company only managed to report over $11 billion in sales and $3 billion in net income. Fast forward to fiscal 2016 and the company did over $30 billion in sales and $13.5 billion in net income. So when was the better investment? Again it comes down to one’s expectations but long term investors should definitely be tilting towards now over 2013. Yes the stock may be temporarily on the wrong side of the growth curve but the numbers never lie. Eventually you would feel that Gilead’s expertise in its principal areas should at least lead to consolidation and then to further growth. True value investors want all the bad news, share price declines and negative growth expectations out of the way as quickly as possible but things usually don’t work out that way. It is very difficult to catch the exact bottom but we do have a few signals in place that the February lows may hold at this point.

Sentiment took a nice spike higher last week and price should follow through. The weekly technicals remain very oversold which makes me believe that earnings in 14 days time could provide the catalyst for Gilead to confirm that its lows are in. Again the market will look for consolidation in Q1 where $2.27 per share is being looked for earnings wise. This projection has been more or less the same for the past 2 months or so which looks encouraging despite the $3+ earnings figure reported in Q1 of last year. A beat here would really be encouraging but as always the trick is to be invested in the stock beforehand. 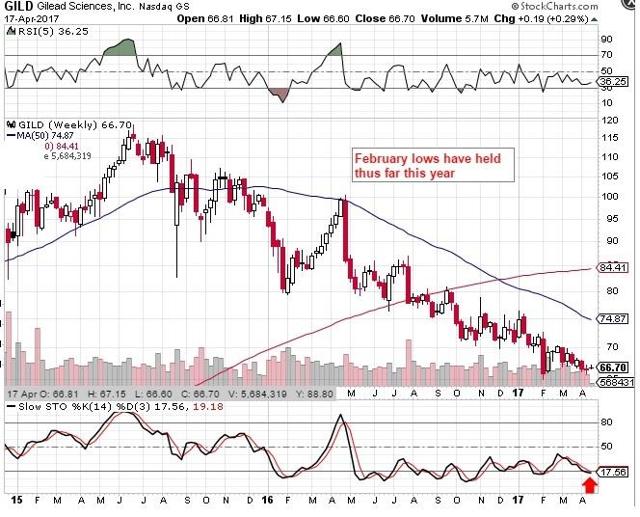 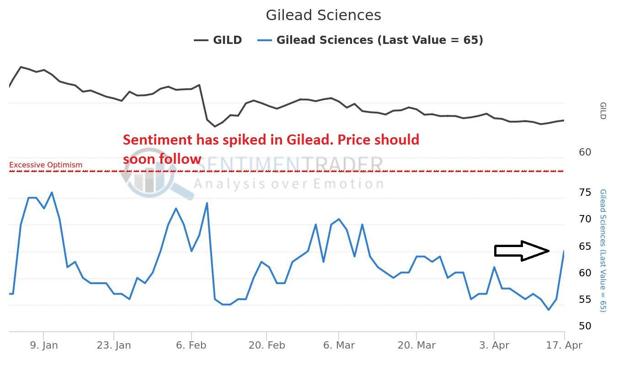 To sum up, despite all its problems Gilead has had over the past few years, the company still holds a pretty dominant position in the HCV and HIV markets. The market just needs to see consolidation and Gilead’s upcoming earnings could finally be the catalyst to confirm that the lows are finally in here. We may place an earnings trade on the 2nd of May in this underlying most probably from the long side through puts or puts spreads

This entry was posted in Gilead and tagged (NASDAQ:GILD). Bookmark the permalink.